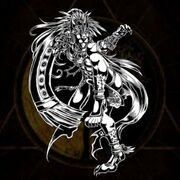 "Few gods are special enough to be formed with the eyeless head of a dog, and a perfectly deformed body, but I am. Nor are others permitted to lead the sun through the night realm so that it might rise again come dawn. Might, I say. You will only find misfortune should our paths cross."

Xototl was a god associated with both lightning and death. He was also associated with the sunset and would guard the Sun as it traveled through the underworld every night.

This deity and a dog were believed to lead the soul on its journey to the underworld. Dogs were associated with Xolotl. He was typically depicted as a dog-headed man, a skeleton, or a deformed monstrous dog.

Xolotl was also the god of fire and lightning. He was also god of twins, monsters, misfortune, sickness, and deformities. Xolotl is the canine brother and twin of Quetzalcoatl.