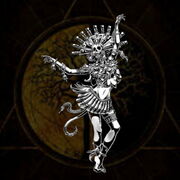 "I am the deity of the stars. I'm often depicted as a skeletal female wearing a skull and crossbones patterned skirt. My leader is Itzpapalotl, the Obsidian Butterfly."

Tzitzimitl (plural Tzitzimimeh) were female deities, and as such related to fertility, they were associated with the Cihuateteo, "Divine Women", the souls of women who died in childbirth.

The leader of the tzitzimimeh was the goddess Itzpapalotl who was the ruler of Tamoanchan - the paradise where the Tzitzimimeh resided.

They were worshipped by midwives and pregnant women. Human sacrifices were offered by the Aztecs to appease the Tzitzimeme, and keep them safely at bay.

They were even described as trying to eat the sun itself at times - the stars that appeared during a solar eclipse were believed to be the Tzitzimeme themselves.