Difference between revisions of "Tlaloc" 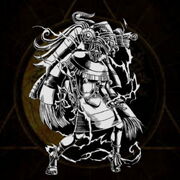 "I am the Aztec God of Rain. A proper offering to me is a burned incense of yauhtli. You can find my stories hidden deep beneath Teotihuacan."

Tlāloc is the supreme god of the rain, and a god of earthly fertility and of water, in the pantheon of Aztec gods.

Although widely worshipped as a beneficent giver of life and sustenance, he was also feared for his ability to send hail, thunder, and lightning - the lord of the powerful element of water.

Tlāloc is also associated with caves, springs, and mountains, most specifically the sacred mountain (Mount Tlāloc) in which he was believed to reside.

His animal forms include herons and water-dwelling creatures such as amphibians, snails, and possibly sea creatures, particularly shellfish.