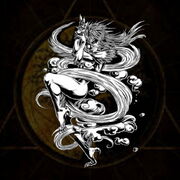 "I am the First of the Seven. I am the South Wind, the horrible Storm with a thirst for destruction."

It is an extremely hot dark wind, burning everything that it encounters, like a black, demonic fire or a destructive tornado. One of its many forms is that of a demonic face with long fiery hair.

It is connected with the desert, the heat of the sun and the drought which brings death of humans and animals, diseases and the destruction of crops. Sometimes they were believed to be sent as "messengers" by the gods to punish humans for their sins.