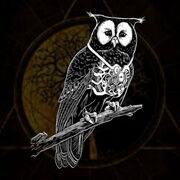 "Only the clever will benefit from my silent gaze."

Spirit derives from many cultures a around the world.

Owls are known far and wide as symbols of wisdom, omens of death, and bringers of prophecy. In some countries, they are seen as good and wise, in others, they are a sign of evil and doom to come.

Sentinel means vigilance - scouting ahead, and on watch.

Familiars will protect its summoner and attack along with them.

Sentinel Owl will attack other spirits without you attacking it.