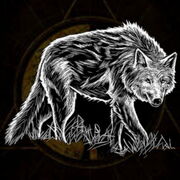 "Blood thirsty, ruthless, and relentless once I've your scent. Loyal to my kind."

The Roggenwolf ("rye wolf") is a ferocious wolf demon, often likened to a werewolf. Blamed for a variety of sins including ambushing peasants to strangle them, kidnapping children, and destroying the crop in the field it calls home, the Roggenwolf is only one in a family of grain-spirits with wolf form.

The last grain heads and tree fruits are often left at their place as a sacrifice for the agricultural spirits. During harvest season Rye Wolves flee deeper into the fields to escape the mowers. With the last cornstalks it becomes trapped.

Ergot is also attributed to this grain-linked supernatural wolf, and from this association it has the nickname “wolf tooth.” The hallucinogenic fungus has a controversial history - debated if linked to numerous historical events including the Salem witch trials.