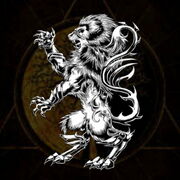 "I am the Sixth of the Seven. I am the Rampant, the vicious lion, who marches against god and king."

Rampant is a very ambiguous force of chaos and disorder, a spirit of rebellion against artificial structures established by humans.

It may manifest as a stronge surge of aggression and energy directed towards destruction. It may also assume hundreds of unstable and continuously changing shapes (resemble a tiger, a panther, a werewolf, or consists of many animal parts) just within seconds.

With its necromantic associations — it may manifest as a destructive force of darkness and death which does not spare anyone — neither kings or gods.