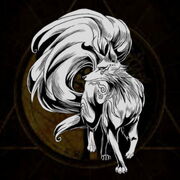 "My fur is as white as snow, as fluffy as the clouds. I am a holy being, meant only for your admiration."

Myobu are known as celestial foxes (a type of Kitsune - opposite of Nogitsune), sworn to the rice God, Inari’s service, and they are sometimes simply called Inari’s foxes. They serve as messengers for the gods and help convey information between celestial and human worlds. These benevolent Kitsune bring good luck, provide protection, and ward off evil spirits. They sometimes impart wisdom or guidance to pious humans.

"Guardian kitsune" were considered good omens and were known for helping others. They are considered of the "High" elements of nature, and are known as the Heaven kitsune, also known as Celestial, or Prime, kitsune. Myobu would be restricted from getting involved in mortal affairs, and it is actually considered distasteful of them to do so, unless they are specifically requested to do so.

Kitsune can have up to nine tails, depending on its age, knowledge and power. One, five, seven or nine tails are most common in folklore, and when a Kitsune gains its ninth tail, it is said that its fur will become white or gold.