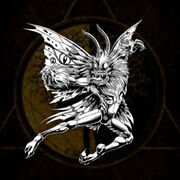 "I am the Winged Man of West Virginia. Some have seen me on bridges, others have seen me soaring above. Since my first sighting in 1966, many have theorized about my whereabouts and origins. I'm out there, I promise you, waiting and watching for the one who is strong enough to master me."

Mothman is one of the most well-known cryptids in the world, made famous partly by John Keel's book (later adapted to film) The Mothman Prophecies.

Mothman is a bipedal, winged humanoid. Despite his name which was given to him by newspapers, he is in no way moth-like. His coloration varies from black, darker shades of gray and brown. He is about 7 feet tall, with a wingspan of about 10 to 15 feet or more, plus the ability to fly over 100 mph.The details of his face and his feet have never been adequately described because anyone who gets a close look at the Mothman seems to suffer from extreme fear and long-lasting psychological distress.

The first recorded Mothman sighting took place on November 12, 1966, near Clendenin, West Virginia. And there are still sightings today.

Some believe that the Mothman tries to warn people about disasters about to happen. Such as the Freiburg and Chernobyl sightings.