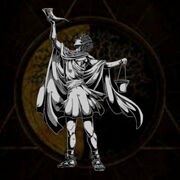 "Call me to your hearth and I will gentle your heart, bless your crops, and protect your sacred places."

Spirit derives from between pre-Roman Italy (around 500 BC) and Roman mythology.

Lares were considered spirits of the dead, only spirits of good men who guarded homes, crossroads, and the city.

The name Lar is Etruscan, and signifies lord, king, or hero.

Originally each household had only one Lar. It was usually represented as a youthful figure, dressed in a short tunic, holding in one hand a drinking horn, in the other a cup.

Some say that Acca Larentia is the Mother of Lares.