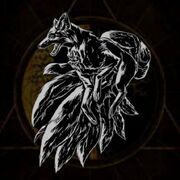 "I am the fox that punishes wicked holy men, the dishonest, and arrogance. Though, I may enjoy a friendly prank now and then."

Kitsune are yōkai foxes. They are a shape-shifting animal, sometimes considered to be bad luck -- and in at least half of all cases, generally mischievous and devious, known for their pranks. However, they can also be very spiritual people, helping others whenever they can.

There are two main groups of Kitsune. This Kitsune is a Nogitsune. The other is a Myobu.

Most tales of Nogitsune are about foxes punishing wicked priests, greedy merchants, and boastful drunkards. They do this by confusing their targets by creating phantom sounds and sights, stealing from them, or otherwise humiliating them publicly through trickery or even possession.

Kitsune are identical to wild foxes found elsewhere in the world, apart from their incredible magical powers. They're cute and small, but Kitsune yōkai often have many tails. They can also be portrayed as bipedal.