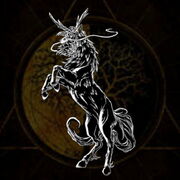 "You may only ever see me with the purest of heart. I will never appear to the wicked as I value life and purity above all else. If you find yourself consumed by my holy fire, yours is a truly dark heart."

Kirin is a chimerical beast resembling a deer with scales like a dragon’s covering its body. It has a tail like an ox’s and a flowing mane. Its body and mane are covered in brilliant holy fire. Its face is the picture of utter serenity.

Kirin never harm good and pure souls, but they are swift and fierce to attack if threatened, breathing holy fire from their mouths.

In Japan, the kirin is considered to be the most powerful and sacred beast of all, surpassing the hō-ō and tatsu in power.