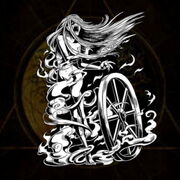 "I roll upon the roads of Japan on a flaming ox-cart wheel. Don't let my method of travel fool you. Get too close and I'll devour your soul."

Katawaguruma is a Wanyūdō (yokai) being that's rolling down the roads of Japan, occasionally stopping to hunt for impure souls to drag back down to hell.

She inflicts powerful curses on anyone who sees her, and the curse can be spread through rumor and gossip, but she has been known to shown mercy at times.