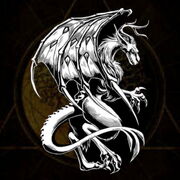 "The Pine Barrens of New Jersey is my home. I move quickly, and emit a blood-curdling scream unlike no other. Are you quick enough to catch me?"

The Jersey Devil is a cryptid said to live in Southern New Jersey, United States. It's often described as a flying biped with hooves but recent sightings describe it as a kangaroo-like creature with the head of a goat. The creature is also described as having leathery wings, horns, small t-rex-like arms with sharp claws and a forked tail.

The Jersey Devil is also reported to make a loud "blood-curdling screach, yell, or even scream."

According to popular folklore, the Jersey Devil originated with a Pine Barrens resident named Jane Leeds, known as Mother Leeds. The legend states that Mother Leeds had 12 children and, after finding she was pregnant for the 13th time, cursed the child in frustration, crying that the child would be the devil.