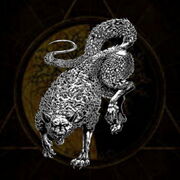 "No longer in service of my old Lord Annwn, I am ready to lend your hunt. Let the night not hold us back, for we have the blessing of Matilda!"

They are relatively harmless compared to the myths of hell hounds as Ännwn was another world similar to our own, but with more aspects of heaven.

The hounds are associated with the Wild Hunt, on 9 specific nights, to hunt down wrongdoers.

They also escort/chase lost souls to Ännwn with the king of Ännwn (Arawn) and sometimes accompanied by a fearsome hag named Matilda of the Night.