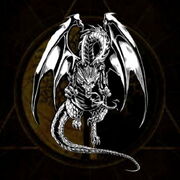 "I am the Second of the Seven. I am the Great Dragon, whose mouth is wide open. None can measure to my true and raw strength."

This dragon-like creature, an "ušumgal" (a serpent monster), can assume forms and shapes connected with all elements. it can become a water serpent-dragon, a fiery dragon, appear as part of the earth with its open jaws as the entrance to a cave, and its airy form: a huge cosmic dragon, encircling the whole universe, like Ouroboros serpent. Its jaws are so enormous that it could easily swallow the globe.

All of these forms and shapes point at the universal nature of the Dragon — an entity containing all four elements within and binding them with the fifth one — the Spirit.