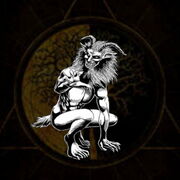 "I was once an esteemed scientist who fell victim to an experiment gone wrong. Now I'm cursed with the legs and head of a goat. Please don't come for me, for I wish to remain in isolation until my misery comes to an end."

This Cryptid is based off of urban legend about a scientist who had a freak accident with an experiment at the Beltsville Agricultural Research Center in the US state of Maryland.

According to Dr. Barry Pearson, a folklorist at the University of Maryland. (Which happens to be in Prince Georges County and is home to a Goatman archive): The earliest sightings date back to 520 BCE as the Satyrs of Greek mythology, who held an almost identical role despite three thousand years.

It is described as a seven foot tall hybrid creature; part man and part goat. Some claim it is a relative of the New Orleans evil chupacabra-like cryptid the Grunch. The urban legends of them often tells of it killing young couples in parked cars or scouring neighbourhoods killing family pets. There are also tales of them breaking into peoples' houses and violating its victims. And many attest from the areas that he haunts, it does not matter if you're a man or woman, he will overtake you and violate you none the less.