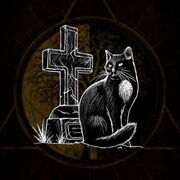 "There can be more gentle companion to witches. I am here to serve."

It's a fairy creature that resemble a large black cat with a white spot on its chest. The legends surrounding this creature suggest that Cat Sidhe was not a fairy, but a witch that could transform into a cat nine times. On the ninth time of changing into a cat, they would be unable to change back to a human ever again. It was this legend that gave us the saying that cats have nine lives.

Familiars will protect its summoner and attack along with them.