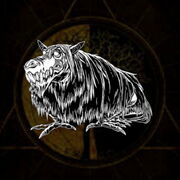 "I thrive in the dark waters of Australia. Rumors of my wicked nature are false, for I care little for the ways of man. For those few that I favor I will give protection."

Spirit derives from the Aborigines in Australia.

Bunyip means "devil" or "evil spirit", native Australians disagree about its disposition. According to legend, a man-eating monster called the bunyip once lived in the rivers, lakes and swamps of Australia. Its howl carried through the night air, making people afraid to enter the water. At night, the bunyip prowled the land, hunting for women and children to eat.

Over time, as European settlers retold this Aboriginal story, it became less frightening and its meaning changed; in the 1800s people used the word as an insult meaning "imposter."

The earliest documented evidence is a set of huge, mysterious bones found by Hamilton Humes in 1818.

Harvesters collects nearby items of value for its summoner.