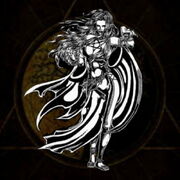 "I am more wise and more beautiful than any living witch. I am a wellspring of mystic knowledge and will share secrets in return for adulation."

Bruxa Evora means "witch Evora". Bruxa Evora is a witch spirit, a defiled Moorish sorceress, who is fluent in Portuguese, Arabic, and Latin, and maybe even more.

Evora is not her name, which is a secret. Instead Evora names a Portuguese city variously ruled by Romans, Moors, Christians, and Visigoths. In the Roman era, Evora was the home of a large Temple of Diana, and perhaps Bruxa Evora is a survivor of those days. Portugal suffered comparatively mild witch hunts, but a woman was burned as a witch in Evora in 1626. Bruxa Evora is the matron of those who practice magical arts. She is petitioned to oversee the spell process and for magical instruction and information.

She has a big, black cat named Luzbel as her familiar.