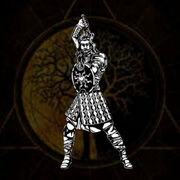 "Once beloved as a shining deity, I am enjoying an age of peaceful obscurity. I keep to my flocks in the sunlit meadows, but I may be called upon for spiritual errands."

Spirit derives from the Celtics.

Belenus (or Belenus) means "the Shining God". By the 3rd century, he became the patron deity of the Italian city of Aquileia.

He is one of the most ancient and most widely worshipped of the pagan Celtic deities; he was associated with pastoralism. A great fire festival, called Beltane (or Beltine), was held on May 1 and was probably originally connected with his cult. On that day the cattle were purified and protected by fire before being put out to the open pastures for the summer. Despite associations of his name with fire or the sun, Belenus was not a sun god; in fact, there is no Celtic evidence for the worship of the sun as such, even though it was often used in religious imagery.