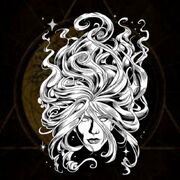 "I am the spirit of the Northern Lights. People come to my domains to see my show and admire my gift of light."

This embodiment of the natural light display gets its name Aurora from the Roman goddess of the dawn.

The Norse celebrated the lights; believing they were earthly manifestations of their gods.

In Roman Mythology, Aurora was the goddess of the dawn. The Greeks called her Eos. She was the daughter of the Titans Hyperion and Theia and the sister of Helios (the sun god) and Selene (the moon goddess). Every morning, Aurora arose from the sea and rode in her horse-drawn chariot across the sky ahead of the sun, carrying a pitcher from which she sprinkled dew upon the earth.

Healers blesses its summoner and allies.