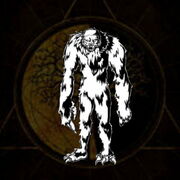 "I am the big grey man that wanders the passes of Ben MacDhui. Those that fear me do not know me, for I am a watchman for the adventurers of my realm."

Am Fear Liath Mòr means "big grey man" in Scottish Gaelic. It's described as an extremely tall figure with a body covered in short hair, or an unseen presence that causes uneasy feelings when climbing the mountain.

The encounter with this Cryptid was first recorded in 1891 by J. Norman Collie but wasn't made public until 1925.

Other climbers have also reported similar experiences, many describing uncontrollable feelings of fear and panic, some actually seeing a huge grey figure behind them, and others only hearing sounds or even succumbing to inexplicable feelings of terror while in the area.