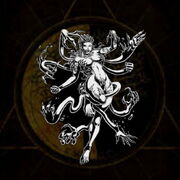 "From atop the old green hills I see the fate of battles before the first skull is cracked. I am a shield for those humble enough to call upon me."

Aeronwen is a goddess of fate in battles determines the outcomes of battles: she decides which side wins and which individuals survive. Aeronwen may be petitioned for safety on the battlefield. Little concrete information survives regarding Aeronwen. She may be the same spirit as the Welsh war goddess Agrona whose name derives from a root word for “carnage.” Aeronwen may or may not also be the same goddess as the Irish Morrigan.