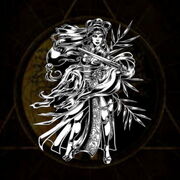 "I am the triple goddess, mother of earth and light. I give birth to spirits of light and live to cast the wicked from the earthly plane."

Everything comes from Abka Hehe (including the other two spirits to form a triad). Once the triad was formed, they created more spirits, people, and all living beings. She is the perfect example of all that is good as she stands guard of the entire universe. An invincible immortal spirit who defeats and banishes evil.