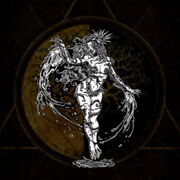 "I am queen of the marshes. The black waters are my dominion. Old secrets lie with me."

Spirit derives from the Yoruba people in Africa and Cuba.

Abata is the Swamp Queen (orisha/goddess of swamp and marshes).

Some Cuban traditions perceive Abata as the male "Abatan".

She has the power to control accumulation of wealth (or the lack thereof). Yoruba tradition identifies her as the female compatriot of orisha Erinle or his wife. Erinle has dominion over thresholds where fresh- and saltwater merge, as happens in mangrove swamps. Swamps are associated with secrets and hidden treasure and so it is unsurprising that Abata is less well-known than her partner.

Harvesters collects nearby items of value for its summoner.